Click here to join the local Sons of Norway Lodge

May 2005 Our Norwegian Lutheran Church in Calumet website was created and launched by Connie Julien at: www.nlc-calumet.org

May 2005: Syttende Mai celebration at the Norwegian Lutheran Church in Calumet. (see below for picture and news press)

Celebrating Syttende Mai 2005:
We appeared on the front page of the local newspaper 15 May 2005; Daily Mining Gazette:  www.mininggazette.com

CALUMET - In 1898, the First Norwegian Lutheran Church of Calumet secured a lot at Elm and Seventh Streets from the Calumet & Hecla Mining Company for construction of a new church.

Though the church remained a dynamic influence serving Norwegian immigrants throughout the 1940s, through the next two decades services were held only sporadically until the 1980s when only a few descendants of the congregation's original membership remained. By the mid-1980s, in need of great repair, the building also became a target for vandals and was considered for demolition by the Calumet Village Council. But through a determined effort, a small group of remaining members of the congregation bought the property and began stabilizing and repairing the wood structure. In 2000, the Norwegian Lutheran Church Historical Society was founded to maintain, restore and facilitate future use of the historic church building. On Sunday, the NLCHS celebrated five years of its existence, and hundreds of hours of rehabilitation work, with an open house at the once-decrepit building. "It's really a beautiful building," said Susan Rokicki, board trustee of the NLCHS. "The style is reminiscent of Norwegian State Church designs from earlier periods."
The church design is said to be an exact replica of a church in Kristiansund, Norway, including stained glass window, a typical Norwegian altar and sloped, theatre seating. The NLCHS is devoted to restoring, not renovating, the wooden structure and has raised $15,000 thus far.
Members have devoted hundreds of volunteer hours to complete building rehabilitation work, including wood siding replacement, partial roof stabilization, electrical service upgrading and restoration of the pastor's study. Rokicki said much work still needs to be done to fully restore the building.
The open house also commemorated Syttende Mai (Norwegian Constitution Day), the 100th Anniversary of Norwegian Independence and National Preservation Month.
The Celebration was also a recruiting effort of sorts for the Sons of Norway, a fraternal benefit organization promoting Norwegian traditions and fraternal fellowship through the cultural and social opportunities offered in local and district lodge activities, including language camps and classes, scholarships, heritage programs and travel opportunities.
There are currently 420 Sons of Norway lodges. The group in Calumet has applied for lodge status and is now seeking potential members. An interest in Norwegian culture and heritage is the only qualification for membership; Norwegian ethnic background is not a requirement.
Should the group be formed, it would be the only one of its kind in the Upper Peninsula and would meet at the Norwegian Lutheran Church.
For more information, or to inquire about making a donation towards the preservation and restoration of this beautiful church, call Susan Rokicki or NLCHS Board President, Joseph Mihal at 906-337-3731.

Members of the Norwegian Lutheran Church Historical Society pose for a photo outside their Calumet church at Sunday's double birthday celebration. The occasions were Norway's 100th year of independence and the NLCHS's fifth anniversary: 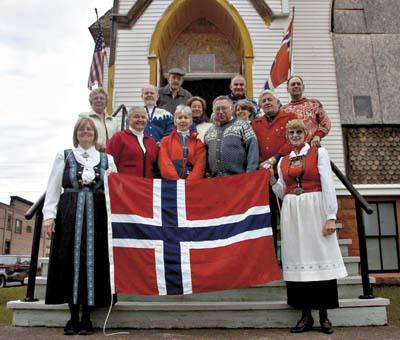 Syttende Mai (Seventeenth of May)

In 1814, the Kingdom of Norway broke away from Denmark after 400 years of being under Danish control. On May 17 of this year, a constitution was established by the Kingdom of Norway at the Constituent Assembly at Eidsvold, and, although Norway was part of a kingdom with Sweden until 1905, Norway has chosen the Seventeenth of May (Syttende Mai) as its day of liberation and celebration.

This day is celebrated in Norway with parades of dressed-up children and adults carrying flags and singing. Some predominantly Norwegian cities in America also choose to celebrate Syttende Mai. Folk dancing and music, ethnic clothing, and arts and crafts are often apart of these American celebrations.

A message from NLCHS Trustee Susan:

Greetings to the members and friends of the NLCHS. We are happy to report that our young organization has experienced much growth and progress since our last newsletter. We have now reached several milestones in our work to rehabilitate the building: siding has been replaced on the west facade, the tower and much of the south side; electrical service has been re-established; and a sump pump and drain have been installed in the church basement. In the area of fundraising, we have received a number of grants and donations that will be used primarily to advance the building's rehabilitation. Similarly, community involvement in the project has increased. We have received interest from a number of area residents in organizing a Sons of Norway Lodge. So as we now move through another busy summer season, we don't want to neglect to thank you for joining us in our effort-through your interest in our newsletter, with your memberships and donations, and by your words of encouragement. Your support helps to propel our work onward. The church will be open for viewing from June through October. If you would like to tour the building and view the rehabilitation in progress, feel free to contact us. Also this summer, the Society will host an information table at the Copper Country Homecoming in Houghton the last weekend in July 2005 and the Calumet Homecoming June --, 2005. We invite you to stop at our table to meet our volunteers and learn more about our organization. We encourage you to take an active interest in the Society, however you are able. For more information about how you can help, call us at (906) 337-3731. All members and interested persons are welcome to our quarterly meetings. Contact us for specific dates and times. Tagg og Hilsen!

Click here to join the local Sons of Norway Lodge